Nearly Four Decades of Experience Working Towards Your Goal

In Los Angeles, legal disputes often begin with a claim that centers around the recently deceased.

Usually, the attorney will write up the document if the deceased was unable to do so at the time because of either "diminished capacity", or because they were "unduly influenced" by another person.

A claim of ‘diminished capacity’ will sometimes be made if it looks as if the deceased suffered from:

Reach out to our Los Angeles breach of fiduciary duty lawyer for a free phone consultation by calling (310) 526-3433, or contact us online now.

A claim of ‘undue influence’ will sometimes arise when the claimant believes the deceased wrote the Will while someone else, usually the person who ends up receiving the most from the estate, persuaded or manipulated the deceased into making their share a great deal larger than any other share of the estate.

Breach of Fiduciary Duty in California

Some legal disputes arise when a trustee of the Trust or executor of the Will is found to be in violation of the law or in breach of their fiduciary duty. Fiduciary duty is the obligation the executor or trustee has to obey the rules and regulations that apply to carrying out the terms of the Will or the trust.

Sometimes a fiduciary, while trying to do what is best for the person to whom they are responsible, will go about it the wrong way. This typically ends in a legal dispute between all parties involved.

Trust administration is governed by the California Probate Code and ought to be navigated with an experienced attorney to ensure the wishes of the deceased are carried out according to the law’s requirements.

Another common estate legal dispute is that of deciding who in the family gets control over the estate once the estate holder has passed away. This type of dispute can include questions as to who should be executor if no one was named, as well as who should assume the role if the person named does not or cannot serve.

To have power over an estate as the executor is to have the power to control the entire property and assets of the deceased. The person who gets control as an executor potentially can earn a fee that makes being the executor lucrative.

An estate legal dispute can arise in other ways as well. Sometimes the terms of the legal document, the Will or Living Trust, are unclear or are subject to more than one interpretation.

The following can all result in a legal dispute:

It’s important to have a good litigation attorney in Los Angeles by your side to sort out these issues in a calm and logical way.

Our Los Angeles legal dispute attorney, Mitch Port, strongly advocates on our client’s behalf whenever a legal dispute arises. Under the proper circumstances, we will bring a dispute to the court’s attention and work toward a resolution by drafting the appropriate petitions. In all circumstances, we will provide the most compelling supporting evidence needed to persuade a judge of our client’s point of view.

Are you or someone you know in need of a great Los Angeles legal dispute lawyer? Reach out to the Law Office of Mitchell A. Port for a free phone consultation (310) 526-3433, or contact us online for all your litigation questions. 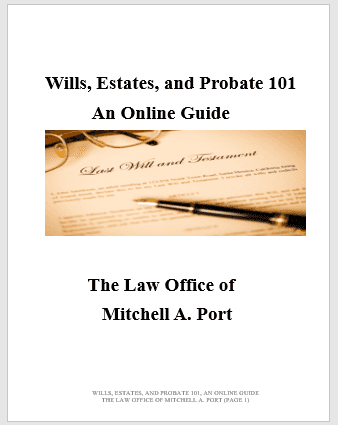 Just enter your email address to receive the download link.